I haven’t done one of these for a while. Today’s link takes you to a collection of old sewing machines.

Hours of fun to be had… 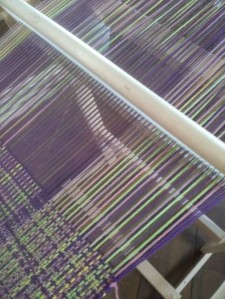 I’m a bit out of my depth here.

But this is important stuff that I need to learn.

Here is the techy stuff you need to know if you need to substitute yarns, especially when you are weaving.  All about take-up, shrinkage, and elasticity.

A while ago, I say something on YouTube about making rope baskets by sewing coils together on a sewing machine. Many years ago, I made a rag rug from plaited scraps of fabric. I sewed it by hand, and it was a very long and tedious job. It was hard to get the needle through the plaited fabric, and every time I put it down to check, the edges had started to curl upwards, so I had to undo some. That made me cautious, but the baskets do look nice.

I’ve got one of those Yorkshire Airers, that haul up into the ceiling out of the way. Owing to a lack of planning, the pulleys were in the wrong place, causing the rope to wear out in a couple of places. Once that problem was fixed, I’d got about 15 metres of suitable rope, most of which was sound. So I thought I would give it a try. I didn’t bother to cut out the frayed sections, as I thought it might add some character.

The result was this fruit bowl size piece. I wasn’t really planning to make anything in particular, I just wanted to know whether I could do it, and how far the rope would go. I like the basket, but it occurred to me that what I could do with was a yarn bowl, to keep balls under control while I’m warping the loom.

So I got some more rope, and built up the sides. I made the openings by finishing off the stitching, then leaving a small loop before starting to stitch again about an inch or two further on.  To try to keep the top edge level, once I had sewn round to the hole again, I cut the rope, and 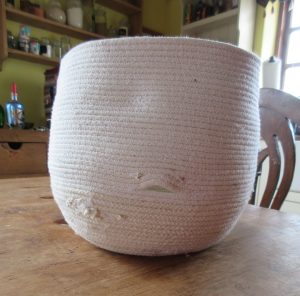 restarted again on the other side of the hole. That worked nicely. The addition to the original basket took 20 meteres of washing line. The whole thing is about 8 inches wide and 7 1/2 inches high.

Then I decided that it would be useful to have a really big basket, to hold all the bits and pieces for a project. This one is made from 100 metres of jute sash cord. I made the base about 16 inches in diameter, and then started moving upwards. When I thought I may get to the end fairly soon. I made some handles. This time, before I finished off sewing, I wrapped a piece of calico under the rope to give the handle some strength, rather than just relying on the thread. I left a loop of rope again, before starting to sew on the other side, 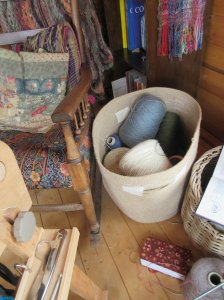 with more calico to support the join. This enlarges the circumference of the top by the amount of the two handles. I went round the whole of the top again, including the handle loops, before repeating the gap procedure to return the top to the previous circumference. This makes handles that stick outwards, rather than the upwards ones shown on the video. I then carried on up the sides of the basket until I had used up all the sash cord. The result was about 16 inches high.

So what have I learned? For one thing, you need a lot of thread to zig zag these baskets together. And you have to be in the right mood. The work is either pleasantly absorbing or mind numbingly boring, depending on how you look at it. The hardest part was placing the handles. I didn’t manage to get mine opposite eachother, in spite of measuring several times. Oh well. I wanted a working item rather than something for display. 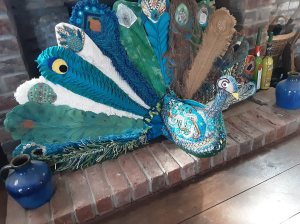 I have finally finished my peacock fire screen. He isn’t quite as I had planned, but then I didn’t think it through properly before I started.

The feathers are sewn to a backing piece of felt, because they tended to move sideways, and to swivel in their sockets. That piece is braced with dowelling and covered with another piece of felt, to keep it tidy. 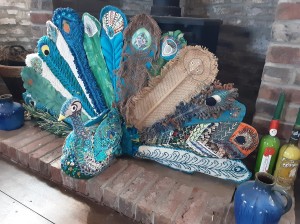 His name is Pugin, and he has featured in the Chartered Institute of Editing and Proofreading’s blog post, Crafty Editors.

You wouldn’t believe how many people have asked me why I don’t call him Penelope. Because he is a peacock. Ah!

I found an old sewing box in a second hand shop a while ago. It was a bit battered, and in need of some tlc. The fabric covered top seemed the obvious place to put pins, but it was very hard, and not easy to push pins in. So I took it apart to see what happened. 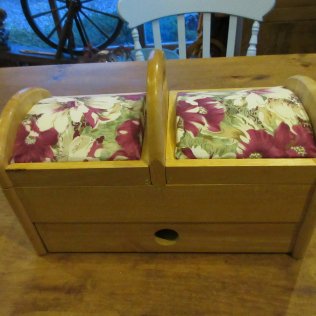 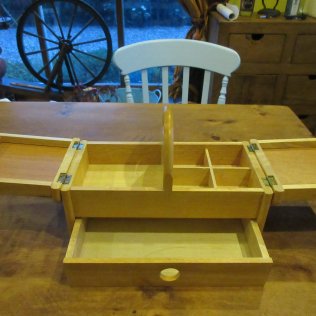 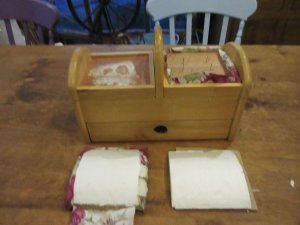 The fabric turned out to be wrapped round a piece of polystyrene, stuck to some corrigated card, which had been glued and pinned to a bit of plywood, then stuck to the top of the box.

So I could have used the top for pin cushions, but it wouldn’t have been long before the polystyrene disintergrated, so it was no bad think to get it sorted. Anyway, I was past the point of no return.

Having got everything apart, I went off to buy some chalk paint. Actually, that is an oversimplification. There were several occasions when I was in the right sort of shop, buying something sensible, trying to remember what else I needed. But eventually, I got some sage paint. 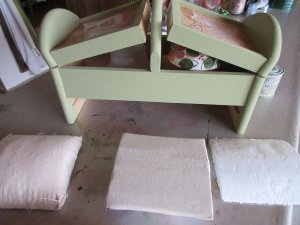 I wondered about drawing a paper pattern for the new cushions, but I decided that was too hard and fiddly. I used the cardboard, and turned the edges of a piece of calico round the edges to make the base. Then I wrapped another piece round the polysyrene and oversewed the two shapes together round three sides. Then I slipped the polystyrene out, stuffed it with lentils, and oversewed up the last side. That made the cushions the right shape, but a little too small, and the sides curled up a bit, leasving a gap. Probably too much stuffing, but it is better to get it firm.

I don’t know why it is that whenever I need a small piece of fabric I can never find one that is the right thickness, or the right colour, or the pattern is the right scale. Eventually, I found some left over from some old bedroom curtains. Laura Ashley ones from the 90s. I stretched this over the cushions, and stuck the edges down on the original plywood shape, using hot glue.

And here is the result: 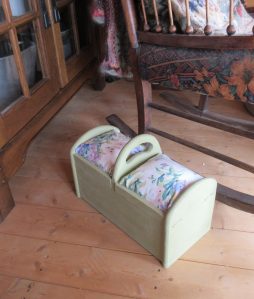 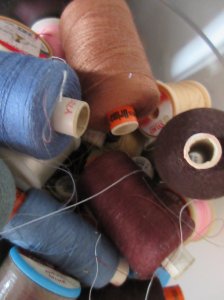 Were you taught to match your thread to the fabric you were making up? Perhaps to use a shade slightly darker, so it blended in?

Well, according to this theory, you only need to keep a supply of neutral colours, which you can use with all sorts of projects.

The mystery of Gunnister Man 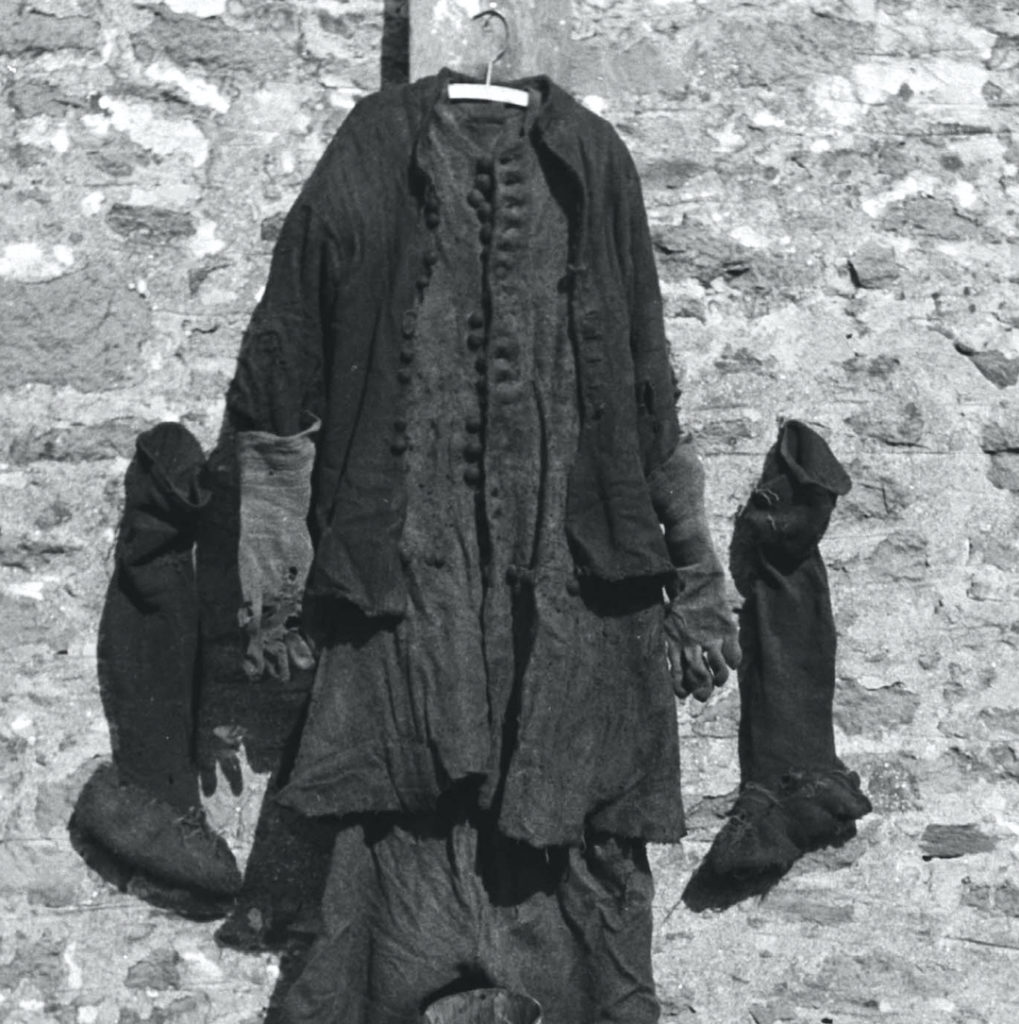 Here is an interesting post about Gunnister Man, a discovery in Shetland in 1951. There is an article to read and a half hour discussion to listen to as well. It is interesting to find out how much you can discover from one set of clothes.

How to sew a laced sleeve

I have to admit that I misread the title of this post. I thought it was about lace sleeves, and the problem of handling delicate fabrics.

So I was surprised when I saw the picture on the post. Still, it is a technique that might come in handy one day.

How to sew a laced sleeve.

Make your own Bayeux tapestry 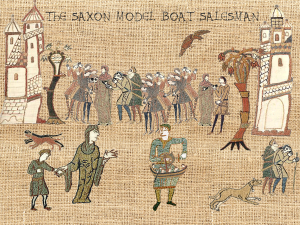 I have found a new game. Making Bayeux tapestry drawings. This is my first attempt.

I feel I have to direct you to the My Modern Met site, as they brought it to my attention, and have gone to the trouble of writing an intelligent article about it. Although they don’t mention that it is the work of English embroiderers, and isn’t a tapestry at all.

But you can just go to the drawing gizmo itself.

There are two fonts to choose from, and a range of characters, buildings and beasts to fill up your picture. The window on the left of the screen has a menu along the top to select a group of pictures you can add. Move through the menu by clicking on the words in the horizontal list at the top of the window, then click to add whatever you need to the picture. Don’t forget to scroll down to the tools. There are some brushes that add crowds, with spacing varied by the speed you move your mouse.  You can then adjust the individual elements to fit whatever you need.

How to sew piping the easy way 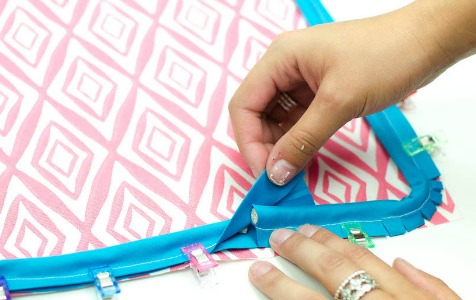 This is a post that will come in handy next time you are making cushions: an easy way to sew piping.

When I get round to making that rainbow cushion, I’ll give it a go…