The basic idea of a resist is simple. Use something to stop the dye getting to the fabric, and it will make a pattern. That something can be string tied round the fabric, or a paste painted on, or just scrunching it up so the dye can’t get through.

The exact effect can be difficult to predict. Sometimes you can get a lovely marbled effect just by scrunching up wet fabric before putting it in the dye bath. Once I didn’t scrunch enough, and it came out a nice even colour all over. Because of that, I try to make sure I scrunch firmly, and often I get over enthusiatic and end up with more of the original colour than I expected. 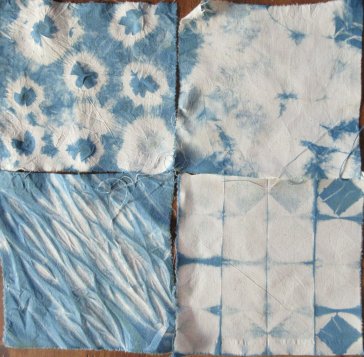 Anything that holds the fabric together works, like a bulldog clip. As you can see from the pictures above, I tried four methods of creating resist recently for my indigo experiments, with the result of the bulldog clip in the bottom right corner of the results picture. I wasn’t surprised that the dye didn’t get to the fabric in the middle of the folded piece, but I thought the outer layer would have a line across the corner where the clip touched, rather than leaving the area under the clip the original colour.

I thought I would try using bulldog clips on a scarf, placing them reasonably far apart, so that the dye could get through to the inner layers, as I wanted a blue scarf with a white pattern. I tried one scarf as it came out of the packet, with just one extra fold, and another with a concertina fold, making it a quarter of the original width.

I folded down the handles of the clips, because my indigo vat is a large kilner jar, so it has a relatively narrow neck. Originally, this jar was supposed to be for mixing only, and I was going to transfer it to a lidded bucket for its permanent home. I didn’t do the transfer at first, so that I could see what was going on. Now I have decided to carry on using the jar. The reason for using a larger dye bath is so that the fabric can move around easily, giving a more even result.  That is good if you want a nice plain blue. I’m after interesting patterns, so a bit of variation is a good thing.

When I undid the scarves, I was surprised to find that the handles are big enough to create a resist, giving an interesting pattern. 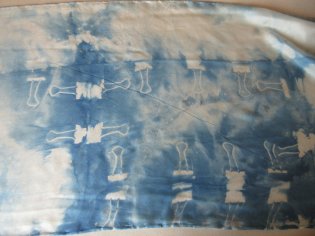 Two more experiments need to follow on from this:

But not just yet…

I am a freelance editor and proofreader, working with a wide range of clients from large companies to individuals. I can help you to communicate clearly by carrying out a final check, or by suggesting ideas get your message over. I also have a sideline in textiles, as The Rainbow Angel.
View all posts by The Proof Angel →
This entry was posted in Techniques and tagged bulldog clips, tie dye. Bookmark the permalink.