At the back of my mill, there is a meadow. For a while, there was a scheme to have a summer house down at the end of the meadow. I was thinking about making some sculptures out of chicken wire, so there could be fairies at the bottom of the garden.

Realistically, the prospect of sitting on the terrace, near the house and looking at the meadow is a great deal more enticing than getting organised to carry everything down to the other end. I don’t like to be too far away from the next cup of tea.

So I need another idea.

Over Christmas, I was looking on Instagram and found some fabulous willow sculpture. I thought that might be a good plan, so I did some research, and ended up in a workshop in Sherburn in Elmet with Leilah Vyner of Dragon Willow. We made the four at the top of this post. Horace is on the right.

We began by making a series of rings. Then we each had a wooden jig, with holes about an inch in diameter, which we stuffed with willow. After making a framework by linking single bits of willow with an overhand knot, we fixed rings on at strategic points to make the basic shape. All of which seemed a bit flimsy and unpromising. Some of the strands of willow from the back of the animal were curved round to refine the shape, then all the spare bits were woven in randomly. More willow was added to shape the front. That took all morning.

After lunch, we stitched the smaller rings together into a head shape with willow, and wove into this base. Leilah made it look easy, and our basic shapes looked nothing like as good as her’s. She told us to keep weaving in some more willow, keeping an eye on the shape as we worked, and she was right. Suddenly we all had something that actually looked like a deer’s head.  A bit of flat weaving to make ears and tails, a few knots, and a bit more random weaving to fill in any gaps, and we were done.

All of which makes it sound much more straight forward than it was, but that is the bare bones of the process. You can see my work in progress below, culminating in Horace looking out of the window at home. He isn’t allowed out yet, as he hasn’t had his injections. He needs a coat of boiled linseed oil and turpentine, and before he has that, he has to dry out properly. Which reminds me, the willow only bends properly when it is wet, so the different colours you see in the pictures are from the willow drying out. 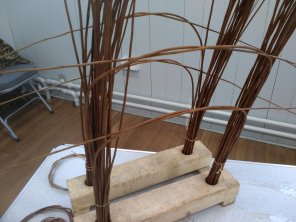 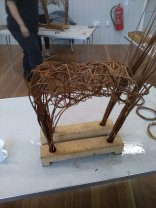 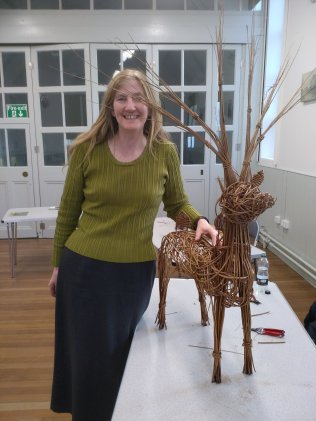 And here is the gallery of everyone else’s work:

I am a freelance editor and proofreader, working with a wide range of clients from large companies to individuals. I can help you to communicate clearly by carrying out a final check, or by suggesting ideas get your message over. I also have a sideline in textiles, as The Rainbow Angel.
View all posts by The Proof Angel →
This entry was posted in Techniques and tagged willow deer, willow sculpture. Bookmark the permalink.