I have been doing a lot of experiments natural dyeing , and I decided to take a course, to get the knowledge in place systematically. So I’m doing a three module course with Justine Aldersey-Williams this year.

In module 1, on colour, we have been learning to make a rainbow out of three plant colours. Justine selected three of the oldest dyestuffs, as they stand the test of time: indigo for blue, weld for yellow, and madder for red.

My weld and indigo both worked well. As I was focussing on small samples, which takes a lot of faffing, I didn’t want to have a lot of due left to use up at the end of the session. I think I have been a bit stingy with the madder. The red is a bit pale.

I did three primary colours and overdyed with the same set of dye baths to get three secondary colours. Then I used modifiers to get a bigger range. I used white vinegar, washing soda, and an iron solution. One red changed so much that I thought it was orange. The weld seems to have dominated the reaction, as all the colours with any weld (yellow, orange and green) look practically the same.

The whole process took quite a lot of time. Normally, I would not have needed to record everything, and keep all the samples in the correct order. As a result, I left everything top dry in a foil tray. And managed to dry creases in. I knew perfectly well that was going to happen, but by the time I got that far I was too tired to think straight.

For the course, I had to show dyed samples in my dye journal, and also prepare a sample card. I’ve also done a small wall hanging to use a nail in the wall of the sewing room (left over from its previous use in my ex’s office). I have another set of samples, which I plan to turn into bunting, but I haven’t got that far yet… 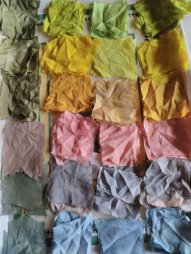 I am a freelance editor and proofreader, working with a wide range of clients from large companies to individuals. I can help you to communicate clearly by carrying out a final check, or by suggesting ideas get your message over. I also have a sideline in textiles, as The Rainbow Angel.
View all posts by The Proof Angel →
This entry was posted in Dyestuffs and tagged natural dye. Bookmark the permalink.