I’ve had this idea brewing for several years now. Grey patchwork elephants on a red background. There has been a bit of a delay, while I collect fabrics. I don’t really do grey, apart from flannel skirts, and somehow my stash is more russet than red.

And then there is the design. After a bit of experimenting, I’ve drawn out three sizes of elephant on squared paper, so I thought I would have a go. Here are the first three elephants. 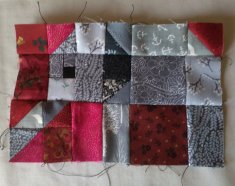 Those of you who are into this sort of thing will notice a bit of a wobble in a couple of places. After many years of using the side of the presser foot to make even, equal size seams for patchwork, I now have a proper patchwork foot. It has a mark along the front every 1/8″. All I have to do is line the edge of the fabric with the second tick along, and I have an accurate 1/4″ seam. Marvellous!

The problem is that I’m not used to it yet. The gap at the front of the foot is somehow putting me off. I’m seeing 1/8 inch gap in the foot, plus another 1/8 ” on the foot. I start using the correct marking, but suddenly I’ve only got a 1/8″ seam. So in these blocks, I have most seams at the proper 1/4″, some at 1/8″, and some start at 1/4″ and then wobble over to 1/8″. And I only realised how much I’d varied when I put it all together. So some of the seams need redoing, but for the current purpose of seeing if the blocks work, they will do.

The size of this quilt is dictated by a rather splendid piece of machine patchwork in shades of gold that I have had in my stash for a while. As I have three sizes of elephant, it makes sense to have them walking across the quilt in a line. To balance things up, I’m alternating between processions to the left and the right. Each line needs something solid to walk on. It would be easy for those pathways to form boxes, which I don’t really want. So I thought I’d fill in the background with some traditional blocks and borders. Which is another variable to play with. Here is the current version of plan. Three cheers for pencil, I say!

I was telling my friend about this idea, and she asked whether the elephants are African or Indian. As the size of the ear is governed by how much shaping can be made in a square grid, I’m not really sure whether you can be fussy about this distinction.

But that lead to the fascinating idea of having Indian and African fabrics to make the distinction. I thought this would be quite straight forward, but my trip round the Festival of Quilts and some surfing suggests that this isn’t going to work. There was a whole stall of African prints, but they were all too colourful to be used in a grey elephant. And traditional Indian style designs like paisleys seem to be out of fashion at the moment.

Still, by the time I’ve got this idea finalised, they may be back in fashion again…

I am a freelance editor and proofreader, working with a wide range of clients from large companies to individuals. I can help you to communicate clearly by carrying out a final check, or by suggesting ideas get your message over. I am an Advanced Professional Member of the Chartered Institute of Editing and Proofreading. I also have a sideline in textiles, as The Rainbow Angel.
View all posts by The Proof Angel →
This entry was posted in Textiles and tagged elephant quilt. Bookmark the permalink.